The exhibition “Line Up” in the gallery [ Der Lokschuppen ] shows large-scale paintings by Anja Mamero as well as aluminium sculptures made by using the traditional sand casting by Berthold Grzywatz.

Born in Hamburg, Anja Mamero first studied industrial design and worked as a product designer in Kiel. Since 2004 she has been working as a freelance designer. Four years later, a fundamental artistic reorientation took place, accompanied by manifold art projects, before she became a student at the Muthesius Academy of Fine Arts in Kiel in 2018. Two years later, she graduates with a Master of Fine Arts degree in painting. As a scholarship holder of the Stiftung Kunstfonds and Muthesius Kunsthochschule Kiel, she is able to continue her artistic work in her Kiel studio. Her participation in the German-Danish exhibition “Experimente/Experimenter” in the Red Palace of Augustenborg in Jutland is likely to be an important success of this activity.

The central design and formal element of Anja Mamero’s painting is the line, horizontal or vertical, bundled or serial, rising firmly from a base, captured in dynamics by framing or spontaneously condensed in the surface, oblique, diagonal, applied with broad brushstrokes. The surfaces of her paintings, usually with acrylic as a base and oil as a surface, are variously layered, prepared from light to dark and sparingly nuanced in color. The construction of the lines is often based on manual work, carving them into the color surfaces with a knife of varying width and density. In addition, she uses the technique of percussion line imprinting. In this method of working, threads soaked in paint are placed on the canvas and weighted with weights at the ends to trace lines on the support.

The rhythmic regularity of the lines in the surface experiences an ambivalence for the seeing through the hand-guided execution: What appears to be an ornamental pattern to the distant eye turns out to be a moving web with multiple spaces in between or a kind of knotted cord with variant bodies when viewed up close.

The painter and photographer Alexander Rodchenko has argued that a new world view has opened in the lines, namely, to build according to the essence and not to depict. This idea may express the utopia of a world organized according to clear principles, possibly the hope for a life based on controllability and balance, but at the same time the expressive power of the line as an elementary force is beyond question.

Mamero’s painting, based on the line, may be subject to an organized plan, to a systematic method according to a fixed concept, to the principle of repetition, but the rows, i.e. the repetitions and variations of the line, nevertheless do not embody stasis, a freezing of time, as it were, but intensity, energy and, not least, movement, which oppose any seclusion from the world.

If one asks about the function of the line in the sculptural works of Berthold Grzywatz, it can be said without a doubt that it is a structuring element: not in the form of a grid, but as an inventory of the composition. The surfaces of his aluminium sculptures made by using the traditional sand casting follow an aesthetic built on relationships, which construct the pictorial structure of the objects, consequently their surfaces, full of tension. The line breaks into the concept of differing textures between movement and rest, sometimes imperceptibly, barely perceptible, sometimes openly, dynamically, with superimpositions, with free and organic forms. Meanwhile, always with the intention of expressing the contradictoriness of the world, its unity marked by disruption and impenetrability in the situational design. 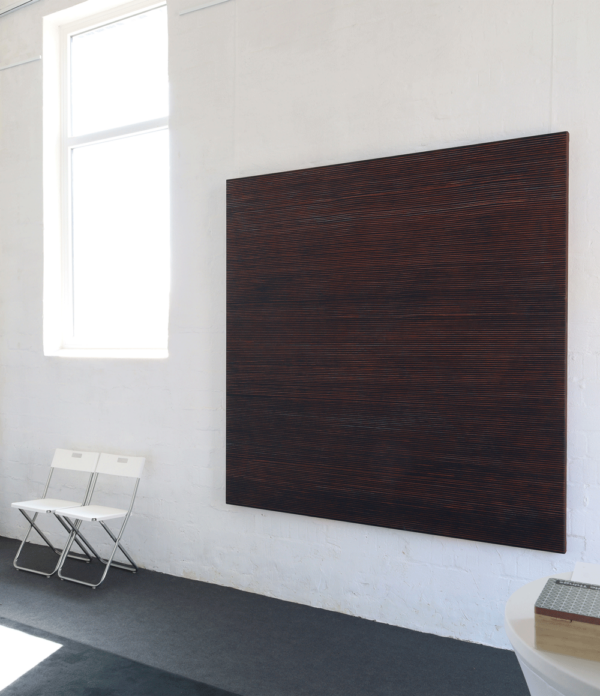